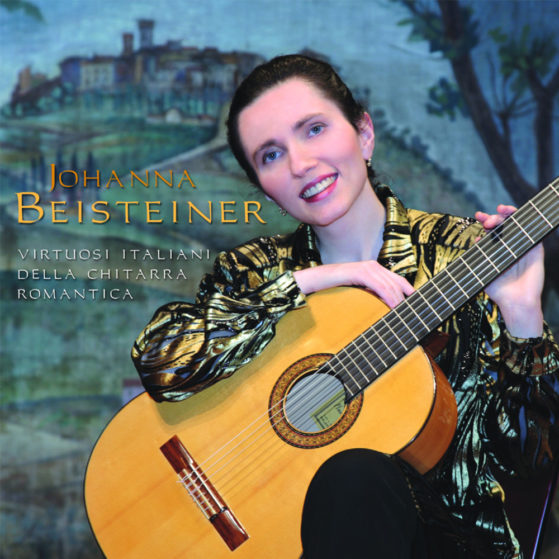 The 19th century had a vital impact on the evolution of the guitar as a solo musical instrument: both the structure of this instrument altered and the scope of the playing techniques widened. Many important virtuosos came from Italy in those days, inter alia Mauro Giuliani, Niccolò Paganini, Ferdinando Carulli and Luigi Legnani.

The 6 Rossiniane opp. 119-124 evidently verify the Rossini fever that prevailed the general musical life around 1820. Presumably, Giuliani composed these pieces in the term of his residence in Rome between 1820 and 1823. Owing to the fact that Gioacchino Rossini also resided in the city in the corresponding period we may assume that the two composers met each other, yet there has been no unambiguous proof for it. The Rossiniana No. 1 echoes the themes of Rossini’s two operas, namely The Italian Girl in Algiers and Armida.

Paganini has been known as an excellent violin player, only few have been aware of his outstanding guitar playing skills, by which he composed a series of artworks for this musical instrument. His Grand sonata in A major was originally composed for the guitar with violin accompaniment. Since the violin had a very negligible part, it was obvious to perform the sonata in a transcription for guitar solo.

Carulli’s Six Andantes contrast the rest of the works recorded. In contravention to Giuliani’s Rossiniana and Paganini’s Grand sonata in A major these pieces scarcely contain virtuosic parts, such as rapid scale passages, or complex changes of positions, but rather require much efforts from the interpreter in concern to performing the tone colours as well as the skill to apply the legato technique.

Legnani’s 36 Caprices  hold an extraordinary position within the guitar repertoire, since they consist of all major and minor keys. The composer also uses keys, which normally are unusual for the guitar because of the instrument’s pitch.

The photos used for the design of this compact disc were taken in Montecastello di Vibio (Italy) at the Teatro della Concordia, which has been listed in the book of Gunniess World Records as the smallest theater in the whole world. The Teatro della Concordia was built in 1808 by Italian aristocrat families during the epoch of the Napoleonic invasion. Concordia – stands for union, by which the architect wished to remind of the idea beyond the French Revolution: the spirit of freedom, equality and brotherhood. The interior of the theater has been decorated with Luigi Agretti’s frescos dating back to 1892.

„Let me express my gratitude to the municipality of Monte Castello di Vibio for their courteous support to design the presentation of this compact disc and let me dedicate this recording to my good friend Edoardo Brenci, the President of the Società del Teatro della Concordia.“ Johanna Beisteiner