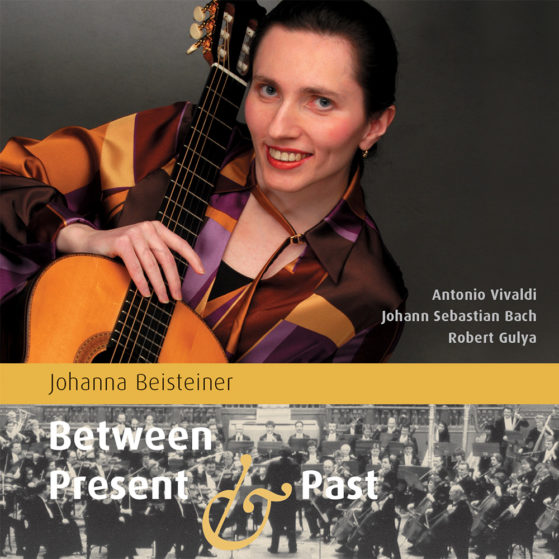 Johanna Beisteiner – Between Present and Past

Between Present and Past, the fourth album by Johanna Beisteiner, is a special medley of works by distinguished composers of the past and contemporary music by the highly talented Hungarian composer Robert Gulya (*1973), who dedicated two new works to Johanna Beisteiner: a Guitar Concerto and a Capriccio for guitar and piano.

“First I wanted to compose a cheerful concerto for Johanna, but when I started to work on the first theme in late summer 2001 during a stay in Los Angeles the terrible event of September 11 influenced my thoughts. For this reason all movements became rather melancholic and sensitive. I tried to realize most of my musical ideas by using all technical possibilities of the guitar. That makes this concerto difficult and challenging even for highly skilled players.

With the Capriccio I wanted to prove that a contemporary guitar piece can be demanding and entertaining as well. Although the guitar is only rarely combined with the piano, these two instruments harmonize very well and give fresh and colourful sound to the composition.

Both pieces were written in order to show a broader public that the classical guitar has a great potential to become a real solo instrument in our concert life. After many years of collaboration I am convinced that both musically and technically Johanna is the perfect artist to reach this aim.” Robert Gulya

In 1704 the only 19-year-old Johann Sebastian Bach composed the Capriccio on the departure of the most beloved brother BWV 992. This piece is supposed to have been written on the departure of Bach’ s brother Johann Jakob (1682-1722), who joined as an oboist the guard of the Swedish King Charles XII in 1704 for taking part at the Great Nordic War. Originally written for keyboard, the Capriccio was recorded on this CD in a new arrangement by Robert Gulya for guitar and strings. This cast intensifies the worried atmosphere and retains the intimate character of the original version as well.

Antonio Vivaldi composed his Concerto in D major for lute, strings and basso continuo. The lute was one of the most popular instruments in the baroque age, but later it was replaced by the guitar. Therefore the guitar takes the place of the lute also in this recording.

Johann Sebastion Bach (1685-1750)/arr. Robert Gulya for guitar & string (orig. harpsichord)
Capriccio sopra la lontananza del fratello diletissimo (Capriccio on the departure of the most beloved brother)
7. I. Arioso. Adagio. A coaxing by his friends to dissuade him from his jouney.
8. II. A picture of various calamities that might overtake him in foreign parts.
9. III. Adagiosissimo. Lamentation of his friends.
10. IV. Now come the friends, since they see that it cannot be otherwise, and say goodbye to him.
11. V. Allegro poco. Aria del Postiglione. (Air of the postilion.)
12. IV. Fuga all’ imitatione della posta. (Fugue in imitation of the postilion’ s horn.)